That Volcanic Ash Can Knock Down Planes, But What About Humans?

Now that the dust is settling, and airports and planes are “back as usual”, experts are divided as to whether the same stuff that can damage jet engines can be harmful or not for people to breathe in.

Experts are divided on this. Depending who you ask, the answer can vary just like the shifting winds which threatened to extend further the “sit-in” for planes at European airports.

The unpronounceable Eyjafjallajokull erupted on 14 April 2010, spewing volcanic ash all over Europe

The World Health Organisation set the ball rolling by announcing initially that it was “very concerned” about the potential health effects of inhaled ash from the Iceland volcano. Other experts poo-poohed this conclusion, claiming that by the time the ash settled to ground level, it would be no different from cigarette smoke or plain old air pollution. “Not all particles are created equal” said a professor or respiratory medicine from the University of Edinburgh.

The British Health Protection Agency concurs, saying that whatever remaining ash that reaches the ground, at the most, would cause those susceptible (such as asthmatics) to have an exacerbation and advised them to have their inhalers ready.

5 days after the Iceland volcanic eruption (note how the media carefully refrains from mentioning the unpronounceable Eyjafjallajokull !), WHO clarified its stand by saying air quality on the ground has not deteriorated, and the observed variation remains in the range of normal fluctuations. There is no change in the current WHO advice about potential health risks: if the volcanic ash reaches ground level in higher concentrations the ash may cause health effects, but these are likely to be minimal.

There is an excellent FAQ  on the health effects of the Icelandic volcano here.

Schumacher – Racing Against The Ravages of Time

Arguably the best Formula One driver of all time,  he is described by the official web-site as “statistically the greatest driver the sport has ever seen”. And so when the seven-time World Champion Michael Schumacher retired in 2006, many proclaimed with finality that it marked the end of an illustrious career.

So, when he announced that he was making a comeback by signing a 3-year contract with Mercedes in 2009, the media, public and racing fraternity got palpably excited at the prospect of watching the maestro perform one more time, very much like a delayed encore after the superb performance.

But..four races into the season, Schumacher’s F1 return is looking more like a big anti-climax. Evidence seems to be accumulating that he is no longer the formidable driver he once was. To quote the Associated Press, “it is beginning dangerously to look like the vain folly of a middle-aged man who got bored in retirement and who missed racing’s adrenaline buzz but who also made the mistake of kidding himself that he still has that old magic.”

Schumacher - at 41, the tell-tale wrinkles around the eyes are evidence of middle-age creeping in

In the four races so far, he finished in the points only in the first race at Bahrain, finishing 7th. After that, in Australia he did 10th, finished unclassified in Malaysia and ending up 10th again in China. And to add insult to injury, his team-mate, Nico Rosberg, 17 years his junior, driving an identical car, has ended up on the podium twice already. This surely is clear-cut evidence of Schumacher’s decline. Further evidence:  in China, while his team-mate Rosberg stayed throughout on dry tyres, Schumacher had his tyres changed twice to suit the weather (indecision?) and was about to do it again when his engineers radioed him to remind that Rosberg had not even changed tyres to suit the weather.

Now, at 41, Schumacher may have to realise that Father Time waits for no man. Body reflexes get slower, muscles get more easily fatigued and the adrenaline ‘high’ may not produce the same boost as in a younger man. This is the reason why participants in other sports retire early – a good example being swimming, when the power-body mass ratio reaches its peak in the mid-twenties.

Added to this are the responsibilities of family life and parenthood. With 2 children (13 and 11 years old), the appetite for risks must be waning as well. Schumacher’s sure touch of the wheel, controlled love of risk and steady nerves once made him so hard to beat. Now, he looks quite ordinary. Said Louis Hamilton, when asked how it felt to have overtaken the world champion recently in China, he matter-of-factly replied “It’s just as exciting as racing with any other driver” .

The death of the Polish President and 95 members of his entourage recently on April 10th  in an air-crash has now been speculated, not to be due to pilot error, but to this modern-day syndrome.

Polish President Lech Kazinski - a victim of his own doing?

‘VIP passenger syndrome’ means simply that a very important passenger uses his or her clout to influence the pilot and/or crew to make a bad decision under pressure. Could this also be the real reason for the deaths of Dodi and Diana when their chauffeur could have been persuaded to drive at extreme speeds to avoid the pursuing paparazzi?

In the Polish president’s case, the Telegraph speculated that President  Lech Kaczynski had previously tried to sack a pilot who refused to land a plane for him in dangerous circumstances. In that incident in 2008, the President shouted furiously at a pilot who had disobeyed his order to land his plane in then war-torn Georgia for safety reasons. He later tried to have the pilot removed from his post for insubordination. 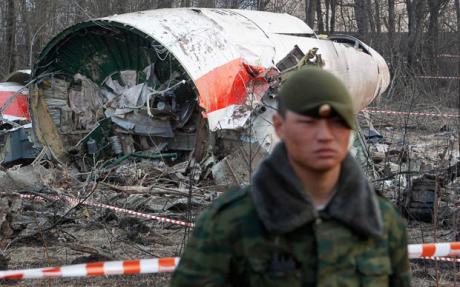 In last Saturday’s crash, black box recordings have confirmed that the pilot, Arkadiusz Protasiuk, an experienced airman serving with the Polish air force, had ignored warnings to divert to another airport because of heavy fog. It was speculated that the late President may have put some pressure to land as he did not want to miss a ceremony for the 22,000 Poles massacred by Soviet forces in the Second World War and may have urged the air crew to continue trying to land the plane.

I must confess that I have never heard this syndrome before, and it surely ranks as one more of new modernistic terminology describing illnesses of the new millennium!

Going To Jail Is Good For Your Health!

According to the United States Justice Department’s Bureau of Justice Statistics (BJS), 12,129 inmates died while in custody from 2001 through 2004. This meant an annual mortality rate of 250 deaths per 100,000 inmates,  19 percent lower than the adult mortality rate in the U.S. general population.

At  first glance, this would actually mean going to prison was healthier because the chances of dying was smaller. On deeper analysis, one wonders whether the following factors leads to a false result:

3. Is the age distribution of prisoners younger than the general population? If so, this comparison would be invalid.

The misinterpretation of such statistics, in general, is legendary, where the persuasive power of figures are used to bolster weak or inaccurate arguments. The phrase “lies, damned lies and statistics” is testimony of the usage of numbers to falsely support erroneous conclusions. 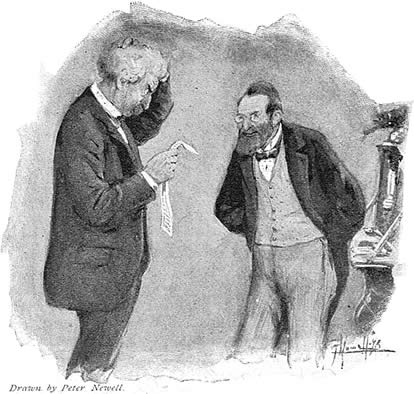 An Aspirin A Day Keeps The Doctor Away..Or Does It?

This most inexpensive medication has been known for ages to be one of the most useful as well. In fact, 3 decades ago, the medical fraternity were singing praises about it – to the extent that healthy doctors were taking it ‘just in case’ an illness were to strike them.There were calls then to even include aspirin in the community water supply so that people would benefit. Read here to find out 50 Everyday Uses For Aspirin.

What does aspirin do? Quite simply, it thins the blood enough to prevent clots from forming within the blood vessels and thereby preventing blockage. This way, various diseases caused by blockage of arteries could be prevented. This includes heart attacks, some strokes and deep vein thrombosis (aka economy class syndrome ).

Now, aspirin, a humble drug which has been used as a pain-killer for over a century, has come under severe cross-examination. Why? Largely because researchers have recently discovered that taking aspirin pills does not prevent heart or blood-vessel disease in otherwise normal people. Its still useful for those who have already got a stroke or heart attack, but if normal people were to take it, no benefits were found. In fact, there is the danger of some of them encountering one of its notorious side-effects – bleeding in the stomach – which may occur for the first time up to months after commencement.What makes it more ominous is that the bleeding can be silent (without any pain) and quite a bit of blood can be lost before symptoms of anemia set in.

Bleeding points in the stomach wall (ulcers), due to aspirin.

Despite this danger, aspirin remains a popular inexpensive medication today although its benefits have not been widely publicized. WHY? Because the ‘big pharmas’ do not find it cost-effective to market such an inexpensive medication despite its proven benefits.  To prevent heart attacks, the estimated cost of a prescription of aspirin per year for one person is less than USD 4. Compare this with the cost of using cholesterol-lowering medications per year – USD2,000 – and you can see where the money is!

What Are Good Friends For? A Longer Life!

There has been countless quotes, poetry and songs on the virtues of a good friendship. In the song co-written by Burt Bacharach What Are Good Friends For? , these lyrics that often keep repeating in one’s mind:

Knowing you can always count on me,for sure

That’s what friends are for..

The video below shows how Dionne Warwick, Stevie Wonder, Luther Vandross and Whitney Houston appreciate what good friends are for..

And now, medical researchers are finding a powerful weapon to help fight illness, depression, hasten recovery, slow down aging and prolong life…your friends. An Australian study on older people discovered that those with a large circle of friends were 22% less likely to die in the 10 years of the study. A similar Harvard research showed that strong social ties will promote brain health as one ages.

I agree. The role of friends to one’s health has been under-appreciated, compared to marriage and family. Sure, there can be rotten apples in the barrel, but with good friends, they can bring a positive psychological impact on one’s well-being, as the above studies demonstrate. Another study of 3000 nurses with breast cancer even showed that friendship had an even greater positive effect on health than a spouse or family member.

Exactly why friends have such a big effect on health isn’t too clear – could it be the ‘feel-good’ factor? Or the physical and psychological support which lessens one’s stress levels? Whatever it is, the message that these studies point out is that friends do make your life better and healthier. 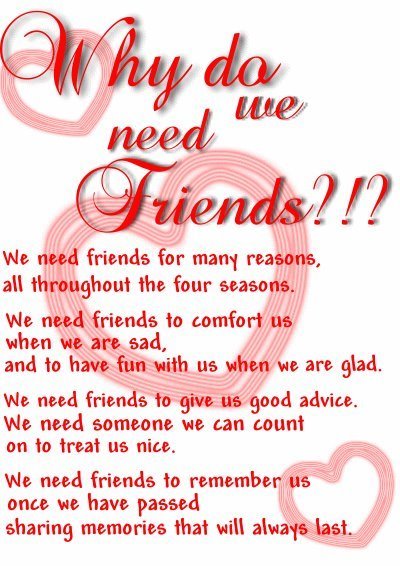