What Killed Natasha Richardson – Lessons To Be Learnt

Natasha Richardson - would have been alive today...see text

Actress Natasha Richardson had an innocuous fall while practising skiing on the beginner’s slope. She was reported to have not lost consciousness and was able to laugh off the whole incident soon after. An ambulance that was summoned to the scene was turned back when she appeared to have fully recovered.

But this soon changed an hour later when she developed headaches and appeared disorientated. Within 1 day, she was dead. What was the cause?

Doctors following this case were not surprised at the autopsy results – epidural hematoma, caused by a blunt injury. Epidural hematoma is a type of brain injury caused by trauma where damaged blood vessels within the skull lead to a blood build-up between the outer layer of the brain and the skull. If not identified and treated immediately, this injury can often lead to death because, as blood pools within the rigid skull, the brain is usually forced out through an opening at the base of the skull (coning) causing irreparable damage and brain death. 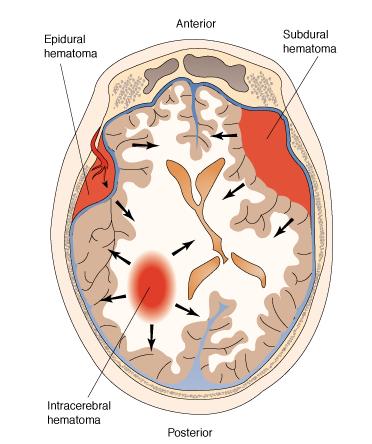 A feature of this kind of damage is the phenomenon called ‘lucid interval’- where the injured party acts and appears fine for an hour or so while internally, at the same time, their brain swells or bleeds. This is why people with head injuries are supposed to be monitored for the first 24 hours after an accident. Richardson may have had a better chance had she had taken the ambulance when it arrived and received timely help. In her case, she was not hospitalised till the next day.

There are lessons to be learnt here:

1. Helmets can help prevent this kind of injury (she wasn’t wearing one). This is the same reason why helmets must be worn at construction sites or on the highways.

2.After any head injury, watch out for severe headaches, confusion, erratic behaviour,paralysis or fits that may only appear an hour after; even if initially everything had looked ok.

3.In suspected cases, an urgent CT scan of the brain needs to be done. If epidural hematoma is confirmed, immediate craniotomy by a brain surgeon is often life-saving.

4.Most important of all, in head injuries, there is no substitute for  immediate professional opinion and management. There are only limited things that can be picked up from the internet or first-aid books. Besides, this is a medical emergency and time lost is a life lost.